Growing up I was lucky to have the opportunity to build strong relationships with people without the risk of having them stolen away. Being in the same neighborhood and school system from kindergarten to high school graduation gives you plenty of time to really know and understand the people in your life, as well as recognize who your real friends are.

I found myself face to face with how quickly life moves at the wedding of a preschool chum, 16 years after we’d first played in the sandbox together. Kids I’d known since Elementary School sat across the table and around the room now as adults in classy attire, all so much different yet so much the same. As far apart as we have been and can be, we all grew up together and are a part of each other despite what we become. There was a nostalgia in the room that day, but also an optimistic recognition of the journey ahead. Events like a friend’s wedding used to seem so far off, now here it was playing out in front of me as if another scene in the movie of real life.

Knowing the people around you and being ingrained in a community is a comforting and easy going feeling. Living surrounded by people you know and love gives you a sense of safety that tends to make life this cushy bubble you just bounce around in. You build your reputation and carry it around with you, its not one of those living situations where the people you converse with today might never be seen again. You build integrity, value and trust with one another, thus creating relationships that support you when things aren’t going smoothly. You become accountable to the community and your place in it, everybody has connections to everybody in one way or the other.

Seeing people you know around town becomes part of the routine. Eventually, you can forget how you’re interacting with the people in your life and simply assume the role of “you.” You embody what you’ve imagined yourself to be in this particular environment and that’s how you approach every situation. Eventually you do things that “you would do” instead of challenging yourself to take a different route. It’s not that you’re changing yourself, but perhaps instead you aren’t allowing yourself to be changed. Plainly enough, when you’re not forced to reevaluate parts of your life, you don’t. If it’s not broken, why fix it? I learned that once its broken you might find a better way of putting it back together. Change causes growth and growth gives you power, but you can only grow with first the desire to change.

The challenge of something unfamiliar is what keeps living interesting. Taking a risk in life even to avoid saying “what if?” somewhere down the line becomes an acceptable approach. I can safely say theres too much to know in a lifetime; instead of trying to conquer it all, we must choose the path most intriguing to us.

As these strikingly real events like children, marriage, travel, career, relocation and unmistakable growth began to surface amongst my peers, it became clear it was time for a challenge. If failure is a prerequisite to success then nothing is lost in any attempt. Getting to where you want to be in life becomes less of a dream and more of a question of how long you’re willing to work to get there. It all comes back to a simple risk, are you willing to try what you don’t know you can do for sure? I soon learned not knowing what you’ll create for yourself next is the most compelling aspect of the journey.

One day I decided to challenge myself to do something I wasn’t so sure I could pull off. I left everything familiar to me behind, packed everything I could fit in my car and moved 1300 miles to Florida without a plan. As it turns out, making an attempt at something you’re unsure of is really empowering. Even making the decision to challenge myself immediately opened my mind to all the possibilities a new environment has to offer. Its weird how your entire perspective can change while you sit in the same place; you could imagine how it changes when you’re moving.

“It takes a lot of courage to release the familiar and seemingly secure, to embrace the new. But there is no real security in what is no longer meaningful. There is more security in the adventurous and exciting, for in movement there is life, and in change there is power.” – Alan Cohen

“The state of your life is nothing more than a reflection of your state of mind.” – Wayne Dyer 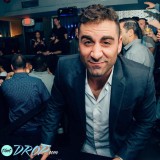