Tim left behind a legacy of knowledge, passion, ideas, memories and thoughts that will continue to shape each moment of every day of my life and the lives of countless others. Among his valuables and digital assets remained several distinct documents he wrote over the years but infrequently shared with anyone. One such document was The 820 Declaration, which I posted on bnapoli.com on August 20th, 2010 at 8:20pm.

The following document he was excited to write for quite some time, but only shared it with me on one occasion.  I’ve carried this document around with me for the past two years but have finally decided to preserve it on the web, along with one of the last photos I have of him and his signature.

“His passion was the Internet and the capabilities it offers to communicate, research, explore, investigate and prosper.” 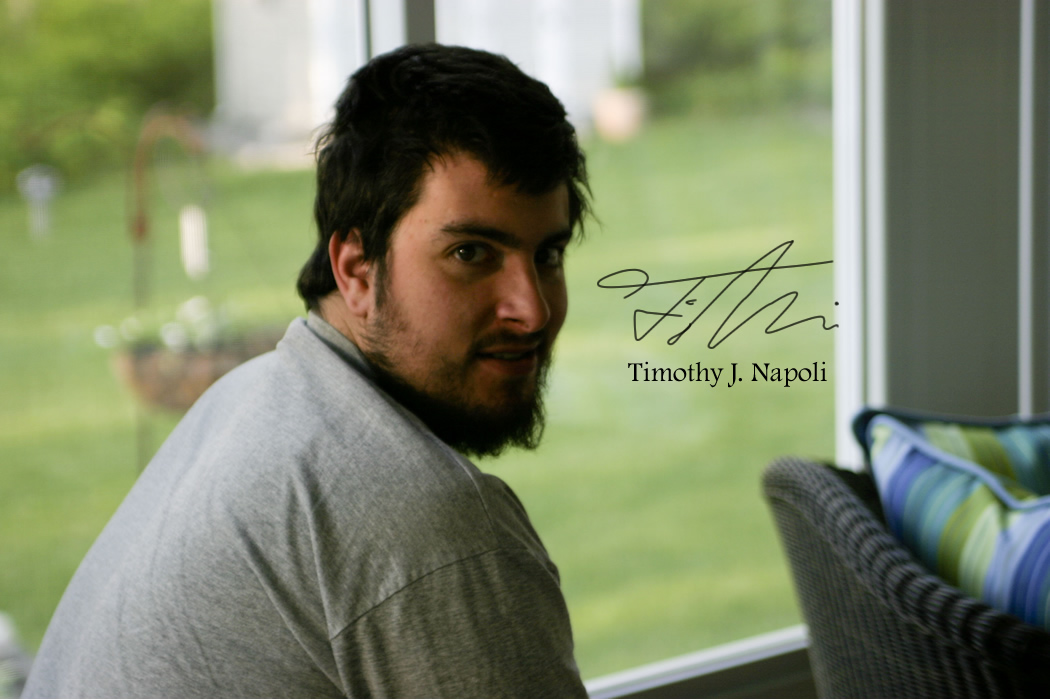 Now. Present, future, and past individuals and societies are forever laden into two equal but separate masses, or spectrum denominations; the left-wing consumers or Bourgeoisie and the right-wing production initiators, or Proletariat.  The two classes will forever exchange power on one semi-egalitarian playing field dubbed “reality”.  All the transactions on the plane occur in, on , or around what society has defined as “time”.  A reaction so powerful will occur, is occurring, or has occurred, that it consumes everything under its own mass and continuous reincarnation.  A 7 year period of pure bliss and consumption will take place beginning in 2000, the once predicted and promoted, “end of the world”.  This will swiftly be countered by a period of rebirth and enlightenment, culminating at 8:20pm EST January 16, 2012, in Waterbury, Connecticut, the self-proclaimed “Nexpire of the universe”.  This is Earth’s final alignment with Planet X, or Niburu, the 10th planet of our solar system, the actual end of time as we can currently comprehend it.

Post occurrence to this chain of events, the two separate factions will realize that the entire time they simply were striving for complete majority rule all along.  Most expressions that have been produced up to now attempt to explain that such a point does exist, and has all along.  Art is the only tangible object, or “artifact”, that endures the hands of time without question, therefore deeming it eternally immortal.  When the pinnacle, or final frontier is reached, “now”, the moment of the present, becomes the past, or history.  It is “true history” because it is a direct sequence of not only time, but also energy transaction.  The sequence can then be slowed, fast forwarded, paused and even manipulated.  At this point, and only at this point, will it be possible to transcend the individual throughout the 7 elements of emotional development instantly.  But obviously some questions still remain; what have I been looking for all this time? If I knew, would I be able to accept the role that I have freely played in this search?

The best rebuttal thus far to the aforementioned, is that a completely accurate answer does not yet exist; simply good attempts have been made.  It is now weak to say that we are bound in fate and our future is pre-determined.  It now is ignorant to say God created man. It now is wrong to say government can choreograph the individual’s personal development.  These ideas are no longer logical, but neither is the image that Big Brother, or society, paints for us.  Contrary to popular belief; You are not the country you live in, or the color of your skin.  You are not the house you live in, or what you give up for Lent.  You are not your education, or the family you return home to.  You are not the food you eat or the drugs you consume.  You are not the clothes you wear or the cars you drive.  You are not your Tiffany bracelet or Swiss Bank Account.  You are what you can potentially input as well as output without taking the veil of ignorance into account at all.

The fact of the matter is, the above could or could not be true. It utterly has no relevance whatsoever; you’ve already downloaded and executed all the valid information.  It is now spreading throughout your soul and entire existence, past, present, and future.  This Expression is etching itself into your subconscious memory tape and is currently erasing all useless information.  The blank space is now being filled with an evaluation system for consumption and a production system designed to extract all untapped resources.  You will now disregard all religious tenets and tear down all predisposed mental pillars society attempts to convey inefficiently, both are useless on your journey into the in-tangent universe.  Your soul has now been blessed with the ability to conjure fire, along with water.  You now have the power to consume a-physically, and produce meta-physically.

The one certain diamond of truth, is that every living organism will die.  Your “essence” will either transcend time or be purged much like your non-pertinent memories were.  Understand that the final choice is now yours and yours alone.  Your destination or “finite reality” depends solely on the countless choices and decisions you make from task to task, day-to-day and the culmination of these tasks.  Each will either digress or move you ahead in your mental and spiritual development.  Creating any medium for a transfer to occur is beneficial and progress, whether personal or societal, is positive no matter what. Regardless of the inherent outcome of any transaction, an outcome naturally must exist.  Finding the medium which captures this begins the battle, utilizing it to its full potential completes it.  Absolute Zero. A new tape begins…..